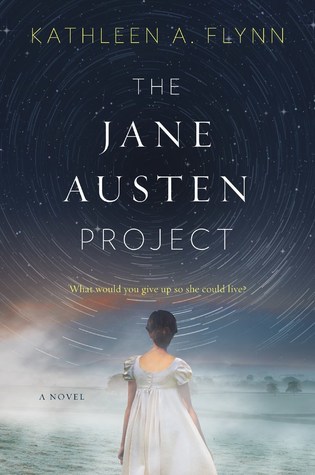 Two researchers from the future-Rachel, an American doctor and Liam, an actor and scholar-are tasked with traveling back in time to 1815 to retrieve Jane Austen’s  completed manuscript for The Watsons. By posing as a gentleman doctor and his spinster sister recently arrived in London from the West Indies, they hope to befriend Jane’s elder brother Henry and thus secure an introduction to the author herself.

Will they be able to pass themselves off as nineteenth-century citizens?  As they become more immersed in the Austens’ world they must decide how far they are willing to go to complete their project.  To complicate their mission further-and despite their familial cover-the feelings they develop for one another are certainly not of the platonic variety. Will their year-long stay in the 1800’s turn into a more permanent visit? Do they dare risk changing history by trying to treat Jane’s illness and extend her life?

When I read the description of this novel, I knew I had to add it to my bookshelf immediately. Unfortunately, I didn’t love The Jane Austen Project as much as I had hoped. That said, I thought Flynn’s writing was strong and engaging. It is very clear that she is an Austen fan and scholar, and one who knows her stuff at that. I really appreciated all of the biographical and historical details she included throughout. Her knowledge of Austen’s life and work, as well as of the Regency period, shines through and elevates this debut novel.

I was slightly disappointed with the character development in The Jane Austen Project. I never felt like I got to fully know Rachel and Liam. Therefore I never became fully invested in their romance or even in their fate. I did however root for them to succeed in their mission to retrieve the completed manuscript of The Watsons, as well as to extend Jane’s life.

My issues with characterization extended to the real life figures as well. Put simply, this Jane Austen was not my Jane Austen. I recognize that I’m not being very fair to Flynn. It’s an impossible task to create a fictionalized version of Austen that is going to match each reader’s expectations of who she was/how she would act. I’m not even sure how I would define my own idea of Jane, only that Flynn’s Jane wasn’t quite it.

I was really engrossed in this story at the beginning, but as the book progressed my enjoyment in it lessened a bit. I wasn’t a huge fan of certain plot elements towards the end, nor of the ending itself. Maybe I would have enjoyed this one more if I hadn’t read it so soon after reading Connie Willis’ phenomenal time travel novel To Say Nothing of the Dog.

This was a well-written and enjoyable summer read. As a huge Janeite, I had high expectations for this novel. Although The Jane Austen Project didn’t quite live up to those expectations, I’m very happy I read it. I would still recommend it for Austen fans looking for a fun and different take on a Regency time travel novel.

8 thoughts on “Book Review: The Jane Austen Project by Kathleen A. Flynn”