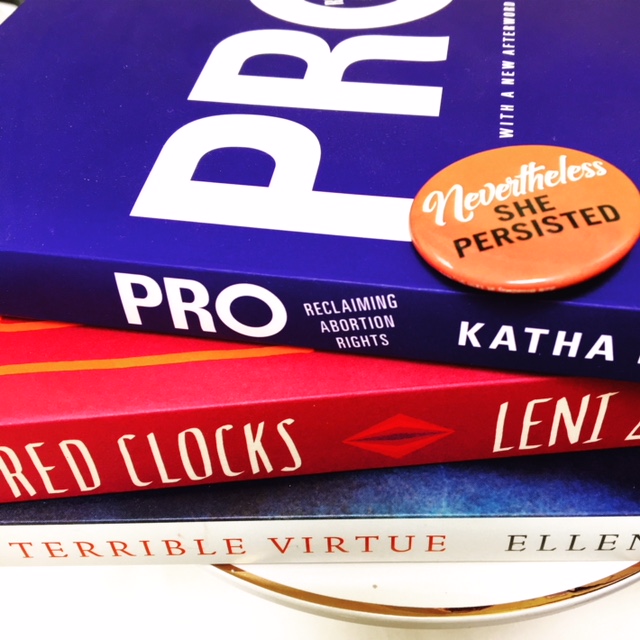 Today (January 22, 2018), marks the 45th Anniversary of Roe v. Wade! I’m incredibly proud to be one of the 7 in 10 Americans who support abortion access and reproductive freedom. I believe that every woman has the right to choose what happens to her own body; that abortion is healthcare; that women’s rights are human rights.

To mark the occasion, I wanted to highlight 3 Books about reproductive rights on my TBR.

Forty years after the landmark Roe v. Wade ruling, “abortion” is still a word that is said with outright hostility by many, despite the fact that one in three American women will have terminated at least one pregnancy by menopause. Even those who support a woman’s right to an abortion often qualify their support by saying abortion is a “bad thing,” an “agonizing decision,” making the medical procedure so remote and radioactive that it takes it out of the world of the everyday, turning an act that is normal and necessary into something shameful and secretive. Meanwhile, with each passing day, the rights upheld by the Supreme Court are being systematically eroded by state laws designed to end abortion outright.

In this urgent, controversial book, Katha Pollitt reframes abortion as a common part of a woman’s reproductive life, one that should be accepted as a moral right with positive social implications. In Pro, Pollitt takes on the personhood argument, reaffirms the priority of a woman’s life and health, and discusses why terminating a pregnancy can be a force for good for women, families, and society. It is time, Pollitt argues, that we reclaim the lives and the rights of women and mothers.

Five women. One question. What is a woman for?

In this ferociously imaginative novel, abortion is once again illegal in America, in-vitro fertilization is banned, and the Personhood Amendment grants rights of life, liberty, and property to every embryo. In a small Oregon fishing town, five very different women navigate these new barriers alongside age-old questions surrounding motherhood, identity, and freedom.

Ro, a single high-school teacher, is trying to have a baby on her own, while also writing a biography of Eivør, a little-known 19th-century female polar explorer. Susan is a frustrated mother of two, trapped in a crumbling marriage. Mattie is the adopted daughter of doting parents and one of Ro’s best students, who finds herself pregnant with nowhere to turn. And Gin is the gifted, forest-dwelling homeopath, or “mender,” who brings all their fates together when she’s arrested and put on trial in a frenzied modern-day witch hunt.

In the spirit of The Paris Wife and Loving Frank, the provocative and compelling story of one of the most fascinating and influential figures of the twentieth century: Margaret Sanger, the founder of Planned Parenthood—an indomitable woman who, more than any other, and at great personal cost, shaped the sexual landscape we inhabit today.

The daughter of a hard-drinking, smooth-tongued free thinker and a mother worn down by thirteen children, Margaret Sanger vowed her life would be different. Trained as a nurse, she fought for social justice beside labor organizers, anarchists, socialists, and other progressives, eventually channeling her energy to one singular cause: legalizing contraception. It was a battle that would pit her against puritanical, patriarchal lawmakers, send her to prison again and again, force her to flee to England, and ultimately change the lives of women across the country and around the world.

This complex enigmatic revolutionary was at once vain and charismatic, generous and ruthless, sexually impulsive and coolly calculating—a competitive, self-centered woman who championed all women, a conflicted mother who suffered the worst tragedy a parent can experience. From opening the first illegal birth control clinic in America in 1916 through the founding of Planned Parenthood to the arrival of the Pill in the 1960s, Margaret Sanger sacrificed two husbands, three children, and scores of lovers in her fight for sexual equality and freedom.

With cameos by such legendary figures as Emma Goldman, John Reed, Big Bill Haywood, H. G. Wells, and the love of Margaret’s life, Havelock Ellis, this richly imagined portrait of a larger-than-life woman is at once sympathetic to her suffering and unsparing of her faults. Deeply insightful, Terrible Virtue is Margaret Sanger’s story as she herself might have told it.

Have you read any of these? Are there any similar titles I should add to my list?