While I plan to spend some time diving back into Testament of Youth this afternoon, there are many books about WWI still on my TBR list. I thought I’d share 11 of these titles  to commemorate 100 years since the end of the Great War.

All book descriptions taken from Goodreads

Scotland, 1915. A group of teenagers from two families meet for a picnic, but the war across the Channel is soon to tear them away from such youthful pleasures. All too soon, the horror of what is to become known as The Great War engulfs them, their friends and the whole village. From the horror of the trenches, to the devastating reality seen daily by those nursing the wounded, they struggle to survive – and nothing will ever be the same again.

A powerful and engrossing novel about love and war, from Carnegie Medal-winning author Theresa Breslin.

Return of the Soldier by Rebecca West

The soldier returns from the front to the three women who love him.

His wife, Kitty, with her cold, moonlight beauty, and his devoted cousin Jenny wait in their exquisite home on the crest of the Harrow-weald.

Margaret Allington, his first and long-forgotten love, is nearby in the dreary suburb of Wealdstone.

But the soldier is shell-shocked and can only remember the Margaret he loved fifteen years before, when he was a young man and she an inn-keeper’s daughter.

The women have a choice – to leave him where he wishes to be, or to ‘cure’ him.

Poems of the First War by Gaby Morgan

Poems from the First World War is a moving and powerful collection of poems written by soldiers, nurses, mothers, sweethearts and family and friends who experienced the war from different standpoints. It records the early excitement and patriotism, the bravery, friendship and loyalty of the soldiers, and heartbreak, disillusionment and regret as the war went on to damage a generation. It includes poems from Wilfred Owen, Rupert Brooke, Vera Brittain, Eleanor Farjeon, Edward Thomas, Laurence Binyon, John McCrae, Siegfried Sassoon and many more. The Imperial War Museum was founded in 1917 to collect and display material relating to the ‘Great War’, which was still being fought. Today IWM is unique in its coverage of conflicts, especially those involving Britain and the Commonwealth, from the First World War to the present. They seek to provide for, and to encourage, the study and understanding of the history of modern war and wartime experience

Ford’s masterly story of destruction and regeneration follows the progress of Christopher Tietjens as his world is shattered by the Great War.

In four volumes (Some Do Not…, No More Parades, A Man Could Stand Up— and The Last Post), Parade’s End traces the psychological damage inflicted by battle, the collapse of England’s secure Edwardian values and the new age, embodied by Tietjens’s beautiful, selfish wife, Sylvia. It is an elegy for the war dead and the passing of a way of life, and a work of amazing subtlety and profundity

Set before and during the great war, Birdsong captures the drama of that era on both a national and a personal scale. It is the story of Stephen, a young Englishman, who arrives in Amiens in 1910. Over the course of the novel he suffers a series of traumatic experiences, from the clandestine love affair that tears apart the family with whom he lives, to the unprecedented experiences of the war itself.

William- An Englishman by Cicely Hamilton

William was ‘written in a rage in 1918; this extraordinary novel… is a passionate assertion of the futility of war’ (the Spectator). Its author had been an actress and suffragette; after 1914 she worked at the Scottish Women’s Hospital at Royaumont and organised Concerts at the Front. William – an Englishman was written in a tent within sound of guns and shells; this ‘stunning… terrifically good’ novel (Radio 4’s A Good Read) is in one sense a very personal book, animated by fury and cynicism, and in another a detached one; yet is always ‘profoundly moving’ (Financial Times).

In the view of Persephone Books, William is one of the greatest novels about war ever written: not the war of the fighting soldier or the woman waiting at home, but the war encountered by Mr and Mrs Everyman, wrenched away from their comfortable preoccupations – Socialism, Suffragettism, so gently mocked by Cicely Hamilton – and forced to be part of an almost dream-like horror (because they cannot at first believe what is happening to them). The scene when William and Griselda emerge after three idyllic weeks in a honeymoon cottage in the remote hills of the Belgian Ardennes, and encounter German brutality in a small village, is unforgettable. The book, which won the Prix Femina-Vie Heureuse in 1919, is a masterpiece, written with an immediacy and a grim realism reminiscent of an old-fashioned, flickering newsreel. 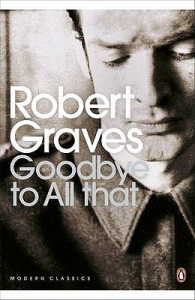 Goodbye to All That by Robert Graves

An autobiographical work that describes firsthand the great tectonic shifts in English society following the First World War, Robert Graves’s Goodbye to All That is a matchless evocation of the Great War’s haunting legacy, published in Penguin Modern Classics.

In 1929 Robert Graves went to live abroad permanently, vowing ‘never to make England my home again’. This is his superb account of his life up until that ‘bitter leave-taking’: from his childhood and desperately unhappy school days at Charterhouse, to his time serving as a young officer in the First World War that was to haunt him throughout his life. It also contains memorable encounters with fellow writers and poets, including Siegfried Sassoon and Thomas Hardy, and covers his increasingly unhappy marriage to Nancy Nicholson. Goodbye to All That, with its vivid, harrowing descriptions of the Western Front, is a classic war document, and also has immense value as one of the most candid self-portraits of an artist ever written.

A powerful tale of war, redemption and a hero’s journey.

In 1914, Joey, a beautiful bay-red foal with a distinctive cross on his nose, is sold to the army and thrust into the midst of the war on the Western Front. With his officer, he charges toward the enemy, witnessing the horror of the battles in France. But even in the desolation of the trenches, Joey’s courage touches the soldiers around him and he is able to find warmth and hope. But his heart aches for Albert, the farmer’s son he left behind. Will he ever see his true master again? 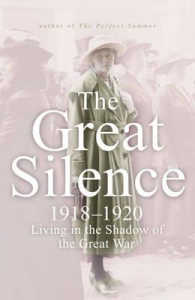 The Great Silence 1918-1920: Living in the Shadow of the Great War
by Juliet Nicolson

Peace at last, after Lloyd George declared it had been ‘the war to end all wars’, would surely bring relief and a renewed sense of optimism? But this assumption turned out to misplaced as people began to realise that the men they loved were never coming home. The Great Silence recalls the period of adjustment following the war.

Testament of Youth by Vera Brittain

n 1914 Vera Brittain was 20, and as war was declared she was preparing to study at Oxford. Four years later her life – and the life of her whole generation – had changed in a way that would have been unimaginable in the tranquil pre-war era. TESTAMENT OF YOUTH, one of the most famous autobiographies of the First World War, is Brittain’s account of how she survived those agonising years; how she lost the man she loved; how she nursed the wounded and how she emerged into an altered world. A passionate record of a lost generation, it made Vera Brittain one of the best-loved writers of her time, and has lost none of its power to shock, move and enthral readers since its first publication in 1933.

A look back at one of the seminal, and deadliest, events of the twentieth century: World War I.

The savagery of the fighting, the appalling conditions endured by the soldiers, and the sheer scale of the carnage have seared images of World War I into the public memory. This book captures the wide sweep of the conflict, describing the development of the fighting from 1914–1918, and spotlighting obscure but important actions, major battles, and the soldiers who risked their lives. It covers such subjects as the Western and Eastern Fronts, US entry into the war in 1917, the war in Africa, the Russian Revolution, the war at sea, the role of women, and diplomacy in war. Combining a vivid narrative informed by up-to-date research with an array of original documents and memorabilia, including photographs, propaganda, newspapers, personal letters, and military orders, The First World War Remembered brings to life one of the most terrible periods of warfare the world has ever known.

Have you read any of these? Which ones are on your TBR list?